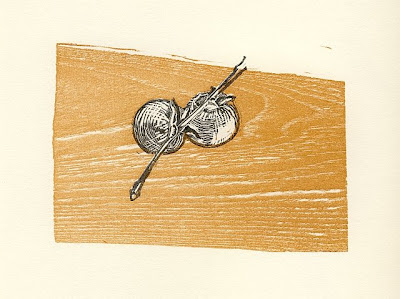 Last weekend, here in Bloomington, I attended a wood engraving workshop taught by Gaylord Schanilec. Gaylord gave a talk the night before at Indiana University's Lilly Library about his personal history as an artist and printer. He's recently completed Sylvae; a catalogue and guide to the 24 species of trees on his Wisconsin property. The theme of trees and printing their grain was to come up in the workshop later.

With it being a two-day introduction and the fact that I haven't done this sort of printmaking before, I didn't get too ambitious in subject matter or complexity.

Gaylord has found that endgrain blocks of hard maple work just as well, if not better, for his purposes as the more traditional boxwood, so that's what was used for my print. The background block was printed from elm, if I'm remembering correctly. I learned a bit about the marks which different gravers make as well as how to operate a Vandercook proo 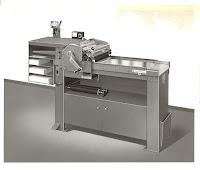 It's been a long time since I've done artwork in two dimensions, especially this sort of thing where what you create on the block isn't directly related to what you get as a final result. The image is reversed, of course, but also with wood engraving if you want to create a black line, you've got to cut it twice- once on each side. The tendency is for beginners to create white-line images, on black backgrounds because it's much easier to conceive. At one point I realized I was carving the block instead of engraving it, so if I want to delve further into this art form, my mind's got to separate the three-dimensional instincts of miniature carving and its tool use, from those of two dimensions.
I have some boxwood in my store that isn't idea for carving, so I might cut out some type-high blocks, order some gravers and get cutting.
Posted by Doug Sanders at 7:55 AM No comments: