I'm off to the International Netsuke Society Convention in Beverly Hills tomorrow, so I've got just enough time to post some photos of recent work. When I get back, I'll update the post with some fuller descriptions and a review of the event. 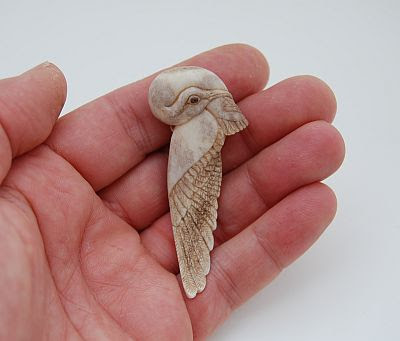 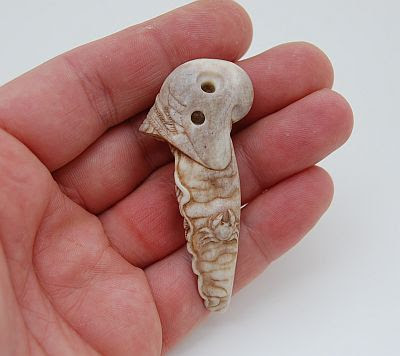 This one's entitled "Curlew & Crab", in reindeer antler with horn inlays. The curlew is depicted with a wing extended on the recto, and then tucked back in a broken wing bluff on the verso. The crab lies on seaweed, or sand; whichever pleases. 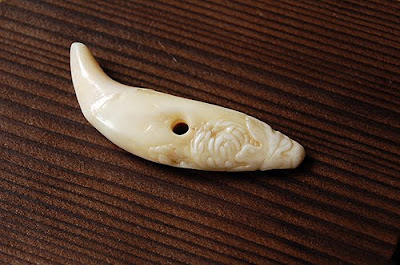 Next is "Chrysanthemum"; a delicate vignette carved into a black bear canine.

Finally, a new squirrel: box, horn and semi-fossilized antler
For those who can make it to the convention, be sure to stop by and have a chat. It looks to be a well-planned event! 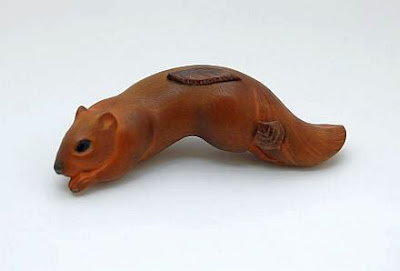 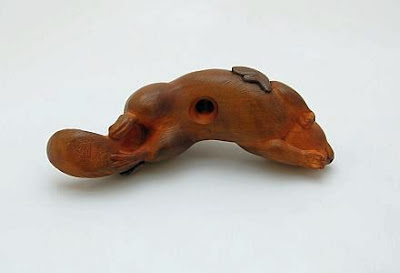 I'll be sharing a dealer's table at the upcoming International Netsuke Society Convention this May in Beverly Hills, California.

I'm humbled to be sharing a table with Clive Hallam and Nick Lamb, both fantastic artists and great people. Those of you who may look at my blog and are members of the INS, please stop by the table and introduce yourselves. I'll enjoy saying hello and conversing a bit.
The first and only time I've attended the convention was in 2005. It was an eye-opening experience that provided some important lessons and inspiration. Most of all, I enjoyed meeting fellow carvers of an art form who tend to be widely yet sparsely scattered around the globe. Until then, I'm working hard to bring a body of quality work for display and sale.
Posted by Doug Sanders at 11:27 AM No comments:

Portrait of the Artist's Dog 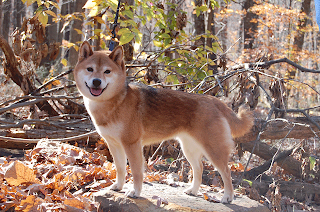 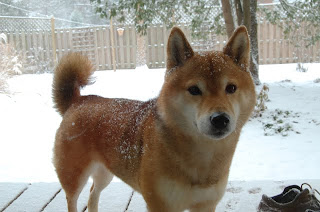 I've had my dog, Fumi, a Shiba-inu for about five years now, and have never done a carved study until this netsuke. It was handy having a live model around, for constant referral- though difficult in trying to capture something I know so well. She measures 6cm in length which is about the width of three of my fingers, or actual size as presented below. She's carved in boxwood, with amber eyes and horn pupils. I haven't done many animals in a realistic fashion lately and enjoyed the development of skills in hair carving and eye inlays. The ears were kept shorter than actual, to make for a better netsuke form. 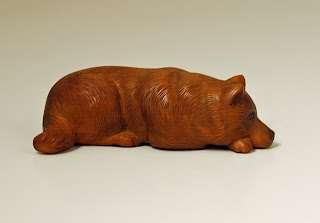 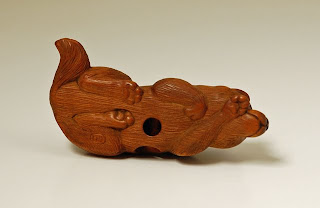 From time to time I set aside the microchisels, scrapers and polishing materials that I use for my more meticuluos work and just pick up a knife and go at the wood in a more informal, direct approach. I think of it in terms of sketching- to learn a subject's form or figure out a composition. The works have a more whittled appearance, in western terms.
This is a piece I did recently in plum wood from a local tree. I was carved with just a few blades. I finished it by rubbing vigorously in a tub of rice bran; the bran has a slight polishing effect, and the traces of oil deepen the color of the wood. It's 7 cm high, so a life-size representation of a cicada. 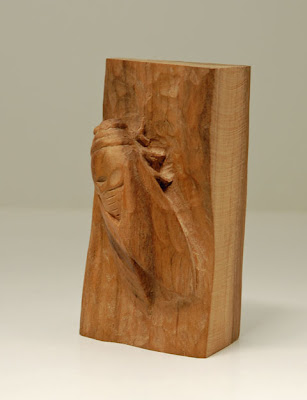 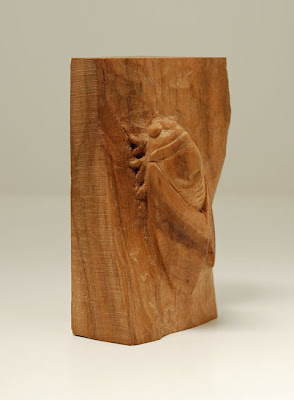 The knives I use for this sort of work are of two designs; one western and one Japanese: The western one is German made and sold under the brand Two Cherries. It's held with a fist grip and can be used in both push and pull directions as it has a double bevel. I'm right-handed, so when pushing the blade, I use my left thumb against the back of the blade as a fulcrum and to control it better. When pulling, my right thumb is on the sculpture and I draw the knife towards it. This is a great knife for roughing out and removing larger amounts of wood. 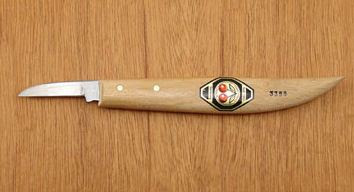 The second is a typical Japanese carving knife sold by Michihamono. It has a single bevel and is held with a grip similar, but not identical, to how one would hold a pencil. It is utilized with only push cuts and is fantastic for later-stage carving, to refine the form and create a smoother surface, by gently shaving away the facets left by earlier stages. 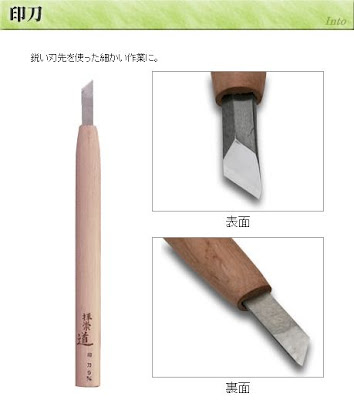 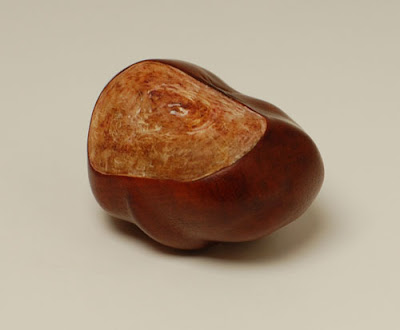 For those who are familiar with my work, it is clear that I enjoy nuts as subject matter. I've done ginko nuts, hickory nuts, acorns and chestnuts. This is the second horse chestnut I've carved- the first was years ago and was sold at the 2005 International Netsuke Society Convention fund raising auction. I think it may have changed hands since then as well. The title was "Retired Conker".

Rather than letting my mind wander too much for this one, I settled on a straight-forward representational carving. If you look closely at these nuts- really close- there are enough textures and subtleties to keep one very busy and puzzled as to how to best convey such things. There's the beautiful contrast between the waxy, slightly greasy surface (not quite smooth- almost like leather) covering the bulk of the nut, and the matte, rougher area at the top.
The finished piece is in boxwood, with some subtle texturing and coloring steps added. It measures about 3.5 cm at the widest; same as the real McCoy. 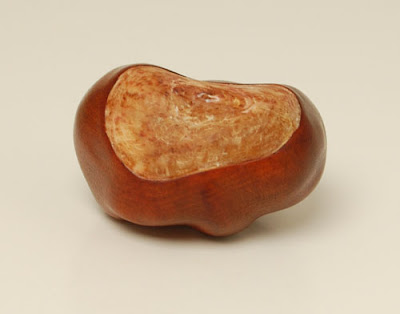 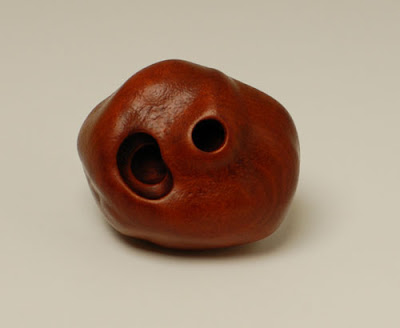 Posted by Doug Sanders at 10:56 PM No comments:

It's the New Year, and after much travel, busy-ness and a new computer, I've gotten around to taking some shots of work completed the past couple of months. In an earlier post I mentioned being intrigued by the kozuka form. I wanted to try to incorporate it into a netsuke that was functional, and had a bit more interest than just an oblong piece with some low relief carving. I hit on the idea of depicting a newt crawling over the surface of one.
The puzzle was what imagery to use on the kozuka itself. I started with ideas of geese, to offer a contrast of sky dwelling and terrestrial creatures. It didn't seem quite right, so my thoughts went to a contrast of scales and I sketched out a couple of mountain scenes. That all seemed too detailed and fussy. Finally I hit upon a dragon. At first I was a bit worried about it being the cliche choice, but once begun, it fit just fine. I like the contrast between a mythical creature and his more reality-based cousin. The contrast of scale is also a success, I think.

It's carved in ebony, with black-lip pearl shell accents. Measuring just over 10cm in length, it would be classed as a sashi netsuke, with the cord attachment through the newt's tail, and the entire piece thrust behind one's obi. 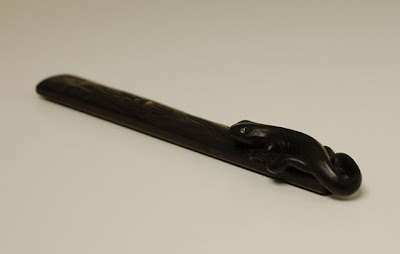 Posted by Doug Sanders at 10:37 PM No comments: